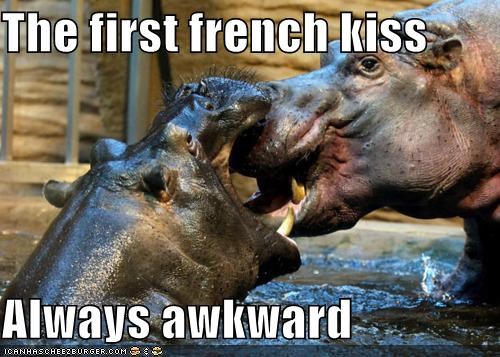 In the past few weeks (while I’ve been neglecting my blog), I’ve been dating (duh). First dating, to be exact. In fact, I’ve lost count, but I believe that in the last two months I’ve been on at least 15 first dates. That’s not counting anyone I went on a second date with, or anyone I’m still in communication with, that’s straight first dates, no contact after. “But, Molly,” you may be thinking, “I’m fairly sure they make pills to fix that kind of thing”. And to you I say, stop trying to sell me drugs.

In all of this first dating, I’ve done a bit of first kissing as well. And while the first kisses have been far fewer than the dates, I’ve come upon a disturbing trend. About a third of those guys have not just kissed, but full on made out with me, right off the bat. One of them had his tongue in my mouth before he even said hello, right on the street. One kissed me in the middle of a crowded bar, maybe an hour after meeting me. One, I’m fairly sure, made out with me just because we ran into a guy I knew while we were out. One shoved his fingers in my mouth while we were kissing, and all I could think about was that they didn’t taste like soap.

Here’s the thing—these are the guys who, a day or two after the first date, text at midnight inviting me over, or the ones who I say no to going home with after the first kiss tongue fest and who consequently and unsurprisingly don’t call or text ever again. And what it comes down to, I think, is basic respect. A guy who’s going to try and fondle your nipples through your dress while standing in front of your car after making your acquaintance two and a half hours before, isn’t the kind of guy that’s inclined to give a shit about you after a week or two.

All things considered, I’m not crying over the loss of any of these specimens, but I would like to know what happened to good old-fashioned first kisses. No tongue down my throat, no attempt at over the shirt action, no proposition for sex, no scent of saliva on my face after—just a sweet, simple, tingly first kiss. Where have they gone? Are they hibernating? Did they start to die, like Tinkerbelle in Peter Pan, but no one clapped to keep them alive? Did they join a wandering band of gypsies? Wherever they are, to quote Liz Lemon, I want to go to there.